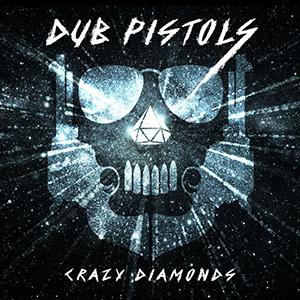 Dub Pistols, the London based band around charismatic front man and former DJ Barry Ashworth, this year celebrates its twentieth anniversary, or as they like to put it themselves: "Twenty years of unhinged lunacy!", and to celebrate that milestone they're now also presenting this new long player. 'Crazy Diamonds' is the band's seventh studio album to date by and once again offers a pulsating mix of dub, reggae, ska, punk, breaks, beats and drum & bass. 'Crazy Diamonds' opens in style with 'London Calling', in which a sample from the famous: "This is London calling ...", used by the BBC World Service during the Second World War to start their international broadcasts, can be heard; a solid tribute to their home base, with London based MC Navigator on vocals. The majority of the other guests appearing on 'Crazy Diamonds' also hail from the Dub Pistols' neighborhood, as Ragga Twins, Lindy Layton, Seanie T and Too Many T's are all based in the British capital (exceptions are Cutty Ranks, featured alongside Seanie T in the excellent 'Kingdom', and Beenie Man, who, also alongside Seanie T, pops up in the dancehall-influenced closing track 'Party's On'). Our personal favorites from the track list are 'Baby I Love You', a revamp of the Jacob Miller classic with Lindy Layton and Seanie T on vocals, 'Lively' featuring Ragga Twins, and 'La La La', a party tune without pretensions, with Too Many T's doing their thing. Wishing this bunch of 'Crazy Diamonds' at least another twenty years of "unhinged lunacy"!