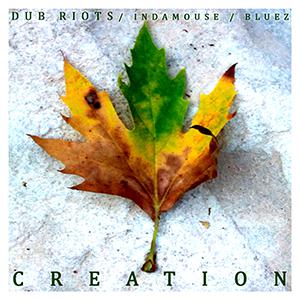 Still looking for some dub to fill the dark autumn days? Then this 'Creation' EP, with matching autumn leave on the cover, might be something for you! For the 4 tracks on this EP, Athenian duo Dub Riots joined forces with fellow townsman Indamouse aka 3voice, and melody player Bluez, together reworking three reggae classics in dub style. With 'Rat A Cut' Dub Riots created a dub version of 'Rat A Cut Bottle', a 1978 classic by Anglo-Jamaican Clarence Williamson aka Lion Youth, for 'Silence Is Gold' they did the same with 'A Still Tongue' by African Brothers, and together with Indamouse they also had a stab at Eek-A-Mouse's 'Long Time Ago' in the form of opener and title track 'Creation'. The EP also concludes with that same song, but in a version featuring Bluez' melodica in the leading role. Excellent Greek dub vibes!