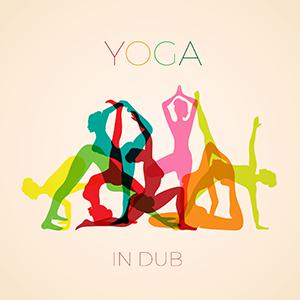 If you're still looking for the ideal soundtrack for the Yoga On Dub sessions Jah9 has been promoting worldwide for several years now, 'Yoga In Dub' by German producer, sound engineer and multi-instrumentalist Felix Wolter aka Dubvisionist comes highly recommended. Wolter played drums, keyboards, bass and percussion for most of the tracks on this album, but was also assisted by an all-star line-up of musicians from bands like Senior Allstars (multi-instrumentalist Markus Dassmann), The Vision (guitarist Nitai Guanmani), Far East Band (drummer Marco Baresi) and Solar Moon/Chin Chillaz (DJ George Solar). Dubvisionist describes 'Yoga In Dub' as follows: "Yoga In Dub' is all about the gently pumping heartbeat and sweet harmonies, stripped back to the bare essentials for a higher cause... that way empowering a contemplative vibe while holding a sacred space for advanced mindfulness.". This can translate into a more dubby track like 'Siva Dub' or even the long hypnotic nyahbinghi-like 'Deva Dub', but just as well turn into a pure ambient soundscape ('Prana Dub', 'Silver Dub'). The titles of the songs always refer to terms that for seasoned yogi (practitioners of yoga) won't have any secrets anymore, but for laymen might deserve a little explanation. The asana from opener 'Asana Dub' is a body posture in hatha-yoga making the yoga practitioner physically stretch their body in order to develop flexibility, sense of balance, stamina and vitality, 'Cali Yoga' refers to the Hindu goddess Kali and Kali asana, a yoga posture based on the traditional crouch posture often adopted by local Indian women during childbirth, and the deva in 'Deva Dub' is a Sanskrit term that can be translated as "divine being" or "good spirit", and can help yoga practitioners to awaken their inner divinity during their exercises. As you can read, we've done our research. Namasté (Sanskrit for "I bow to you", a traditional greeting for yogi)!