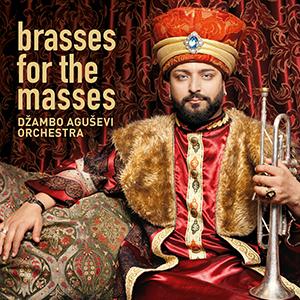 Every time we suspect the Balkan brass genre is really on its last legs, another artist appears literally breathing new life into the genre! This time it's Macedonian trumpeter and band leader Džambo Ozden, better known as Džambo and generally regarded as the most popular Macedonian musician after the unsurpassable diva Esma Redzepova. Džambo was born in Strumica, a town in eastern Macedonia, as the descendant of a musical family. His father Džemal played with several local orchestras and little Džambo often accompanied him. Soon the trumpet caught his eye. Džambo was already dreaming of his own trumpet, but knowing how hard the life of a musician could be, at first his family were sceptic. However, the conductor of one of the orchestras Džambo's father played with felt sorry for the little lad who studied and observed the musicians day after day with such intensity and decided to give him an instrument as a present. From that moment on there was no turning back: Džambo Ozden had to become the greatest trumpeter in the Balkans! The sound of Džambo Aguševi Orchestra is the result of Džambo's own background and his varied musical taste. On this more than appropriately titled 'Brasses For The Masses', the Balkan brass tradition clearly forms the foundation ('Shukri Dvojka', 'Arriba Macedonia', 'Feko Dvojka'), but influences from jazz, funk ('Taksim Dream'), hip-hop (opener and title track 'Brasses For The Masses'), the Turkish music tradition and film soundtracks ('Old Bazaar Groove', 'Crazy Horse') can also be heard. Highly recommended for fans of the Balkan genre!