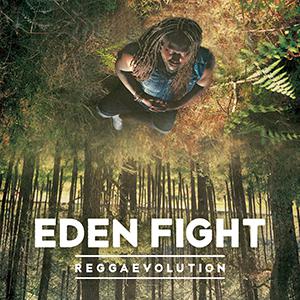 Eden Fight (real name Bruno Gripacus) is a former member of Guadeloupian Karukera Sound System, but has been living in Paris for quite some time now, working on a solo career. Fight's sound is a mix of reggae with influences from hip-hop, pop and dubstep ('Alone'), and on 'Reggaevolution' alternates between English, French and Creole. We were mainly taken with the songs in that last two languages ('Retour Au Pays', 'Sa Ou Ni A Fé', a rather cynical song about struggle for survival and the hard choices that sometimes (can) entail(s), the excellent 'Frère', a variation on the theme: "The ones that are close, will hurt you the most!", and 'Union', for which Eden used lyrical excerpts from Stevie Wonder's 'Master Blaster'), but in the language of Shakespeare, 'Glory', a tune with a riddim that's clearly a nod to Gregory Isaacs' 'Night Nurse', is a nice exception. Also original are the two final tracks on the album, Senegalese mbalax-versions of 'Natty Roots' and 'Sa Ou Ni a Fé'. New roots with a hint of the French West Indies!