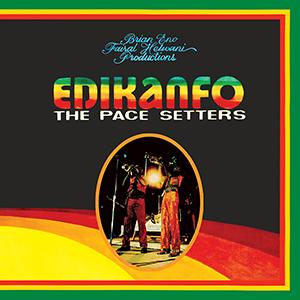 The German Out Here Records label just took us to Ghana for 'Alewa', the excellent debut effort of neo-highlife ensemble Santrofi, and Glitterbeat Records is now also looking towards the West-African nation with this re-release of 'The Pace Setters', a 1981 gem of an album by formation Edikanfo. At the time, the album was released on the London based E.G. Records label, surprisingly enough was produced by Brian Eno, who'd become fascinated with the sound of Fela Kuti and, in his own words, was looking for "a vision of a psychedelic Africa...". Edikanfo (the translation of album title 'The Pace Setters') was an eight-piece band under the wings of Faisal Helwani, a charismatic impresario who operated from the popular Napoleon Club in Osu, a suburb of Accra. With debut album 'The Pace Setters', on which they served a mix of progressive highlife, Afro-funk, disco and psychedelic jazz influences, Edikanfo immediately hit the bull's eye. Unfortunately, soon after its release, fate struck a blow that would determine the faith of the band: in 1981 a military coup led by Jerry Rawlings took place in Ghana and what followed were years of compulsory curfews, completely crushing the local nightlife. Edikanfo threw in the towel and the various band members sought their fortune outside Ghana. Now, almost four decades later, Edikanfo is back! Not only in the form of this reissue, but the remaining band members have also found each other again and can't wait to get back on stage. In the meantime, enjoy this Ghanaian top classic!