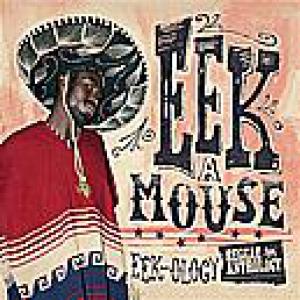 Eek-A-Mouse also got the VP Records anthology treatment. The previous compilation of the reggae mouse's hits ('Most Wanted') only dates from 2008, so for songs like 'Wa-Do-Dem' or 'Ganja Smuggling' you should certainly not buy this collection, but what makes it more than worth your trouble are the less familiar and more roots oriented songs in the track list, songs like 'Creation', 'My Father's Land' (Eek-A-Mouse's first two recordings, financed by his math teacher Anthony Dehaney) and 'No Wicked Can't Reign' from the beginning of Eek's career. Alternate versions of hits like 'Wa-Do-Dem' and 'Assassinator' recorded in 1983 for John Peel's legendary BBC radio show also make 'Eek-ology' a must. Finally, there's the bonus DVD containing a crystal-clear registration of Eek-A-Mouse's performance (backed by the Sagittarius Band) at the 1982 edition of the Reggae Sunsplash festival.