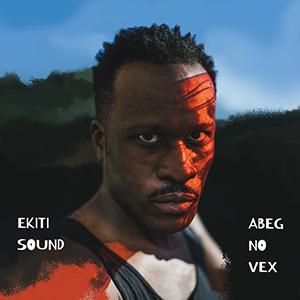 With Ekiti Sound, London-based Nigerian musician, vocalist and producer Leke 'Chif' Awoyinka created a musical dialogue between two world cities: London and Lagos. This duality continues throughout the entire album in terms of content and style, because 'Abeg No Vex' (pidgin English for: "Don't be angry!" or "Don't be angry!") is not only about London versus Lagos, but also about yin versus yang, academic versus unqualified, street culture versus haute couture, and even the countryside of Nigeria (the name of the project is a nod to Ekiti, the state in the southwest of Nigeria where Leke's father comes from) versus the chaos of the metropolis of Lagos (where Chif's mother lived). Chif has been commuting between the two cities for years and for a while worked as a sound editor in Nollywood, Nigeria's thriving film industry, as well as at the famous Pinewood Studios in the United Kingdom, and is the driving force behind the Lagos Music Conference, the first international African music fair. Leke describes 'Abeg No Vex' as: "...the soundtrack to the new diaspora, actively creating a new narrative for the modern African experience with a global perspective." He drew inspiration from squat parties in East London as well as sessions at Fela Kuti's Shrine in Ikeja. 'Abeg No Vex' is a stylistic melting pot of genres switching back and forth between English, Pidgin English and Yoruba. Awoyink serves up some hip-hop serves in 'Testify', with young Nigerian promise Ridwon rapping about his passion for music and the self-confidence needed to make it in the music industry, and 'Rap Kings' featuring Nigerian rap-duo Show Dem Camp - Wale 'Tec' Davies and Olumide 'Ghost' Ayeni at their best. Looking for a dose of afrobeats? Then there are 'Alutere' and 'ADHD', in which Leke talks about his own unstable, energetic character, but also a term referring to the fact we're so distracted in focusing on who we think we should be, we forget to listen to the inner child lurking within each of us confronting us with our true self. In the infectious 'Slow Down' featuring Nigerian artists Ladipo 'LadiPoe' Eso and Funbi on vocals, Leke goes dancehall, and for authentic Nigerian ingredients we refer to songs like 'Ase', the Yoruba equivalent of Asian chi, the life force or energy that enables things to happen and bring about change, 'Oba Oluwe', in which Prince G plays with the Yoruba-parable stating that every saint can be a sinner and vice versa, and that if you make enough of an effort you can achieve everything in this life, or 'A Song For Lara', which starts with a traditional "oriki", a Yoruba custom in which Leke's mother Lara calls on her ancestors to bless her child with character traits like courage, fortitude and perseverance. For the afrobeat of closing track 'Timeless', a call for a united Africa, Leke finally called on good friend and colleague Nneka. We end with a last quote from Awoyinka: "It's a way of paying tribute to where I come from; it will help circulate this name which represents the energy that my parents gave me."