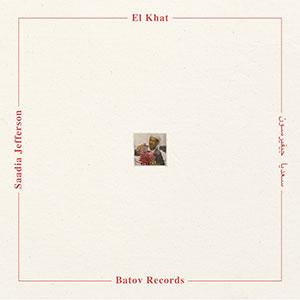 El Khat is a four-piece band from Tel Aviv with members having roots in Iraq, Poland, Morocco and Yemen.

The band's name refers to the addictive leaf that has been chewed in Yemen and on the Arabian Peninsula for over 600 years, and now the country is once again divided in a bloody civil war, offers an escape from the daily stress and hunger.

The 'Saadia Jefferson' from the album title, is a fictional character with a split identity, half Yemeni, half American and Israeli citizen, based on front man Eyal El Wahab's own experiences as a Yemeni Jew in Israel, something he has been struggling with for years and which has increasingly taken its toll in recent years, feeling lost in a state that is flying the flag of Israeli Jewish nationalism while ignoring the Jewish history of its Arab neighbors (a feeling Eyal managed to crystallize perfectly in 'Ptiha', a song blending sound samples of street life in Yemen with the sounds of a subway station in New York).

El Wahab began his musical career in 2012 as a cellist with the Jerusalem Andalusian Orchestra and later flamenco project El Gran Mar. However, in 2017 Eyal decided to call it quits to go in search of his grandparents' roots, Yemeni Jews who migrated to Israel in the 1950s. During that search Eyal one day stumbled upon the LP 'Qat, Coffee & Qambus: Raw 45's from Yemen' (Parlotone, 2012), a compilation full of traditional Yemeni music. It would prove the catalyst for a learning process that, among other things, prompted Eyal to study Arabic, build self-made instruments at his home studio (the album includes percussion instruments made from different types of tins) and lay the foundations for what eventually became this 'Saadia Jefferson' album.

The result is an excellent long-player debut with a sound in which the jazzy wind arrangements of Iby Iban Wakir are alternated with psychedelic keyboards riffs on the Farfisa (also the works of Iby Iban Wakir) and Arabic percussion rhythms by Eyal himself, and broaching subjects that the one time are more universal in nature (opener 'Ya Raiyat', about the desire for a simpler life, 'Balagh Al Ahab', about infatuation and heartbreak, or 'Al Ard' Amamak', about leaving everything behind to start over), and elsewhere refer to his Yemeni roots ('Munjimin', in which Yemeni Jews, before migrating to Israel, are philosophizing about the "promised land", 'Daasa', an instrumental Yemeni traditional).

Two tracks that in terms of content are perhaps most surprising are 'Atabina I & II', in which two women from a polygamous relationship have their say, in part one simply the story of the daily life of the first woman, and in part two the hatred and envy of that same woman towards the second woman.