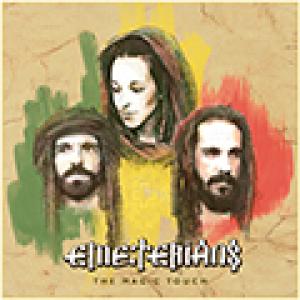 The trio that is Emeterians must have enjoyed their adventure with the Peckings brothers, because for 'The Magic Touch' they decided to extend their stay in the British capital. This time Emeterians joined forces with Carl 'Dillie' McLeod of British label Stingray Records, who called on the cream of British reggae musicians (among other things: Paul 'Jazzwad' Yebuah - drums, Dave 'Fluxy' Heywood - drums, Leroy 'Mafia' Heywood - bass, Dalton Brownie - guitar, Cyrus Richards - keyboards, Earl 'Wire' Lindo - keyboards, Patrick Tenyue - trumpet, Henry 'Matic Horns' Tenyue - trombone, Troy Ellis - percussion) turning 'The Magic Touch' in yet another gem of an album. That being said, 'The Magic Touch' sounds quite different than predecessor 'The Journey'. Where the latter album still featured a variety of styles and subgenres, then 'The Magic Touch' was given more of a lovers rock vibe ('Begging For Love', 'It's You', 'Together', 'Tell Her', 'Perfect Combination'). Exceptions are the militant roots tunes 'Sound Di Alarm' and 'Freedom', for 'World Is Home' the trio goes ska, for 'Vive', a song in the language of Cervantes, Emeterians even go back to their Spanish roots and the trio concludes with the nyahbinghi vibes of 'Oh Far I'. Even though more than one song on 'The Magic Touch' has a vintage vibe, the band only recycled classic riddims for 'Set Me Free' (Cedric 'Im' Brooks' 'Lights Of Saba'), 'It's You' (Keith Hudson's/Big Youth's 'S. 90 Skank') and the great 'Wadada' (Wailing Souls' 'Firehouse Rock'). With 'The Magic Touch' Brother Wildman, Sister Claire and Maga Lion once again prove they're able to deliver the most beautiful vocal harmonies to be found in Europe (and beyond) at this time. Trio with 'The Magic Touch'!