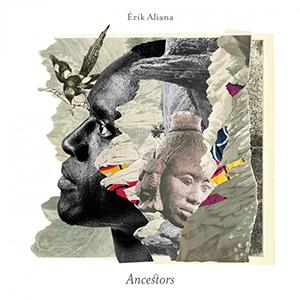 If Cameroonian singer-songwriter Erik Aliana for 'Just My Soul' still collaborated work with bass player Francis 'Picket' Dschoutezo, then for 'Ancestors' he decided on a solo approach (even though Erik did invite Debashish Bhattacharya, master of Indian slide guitar, for two songs). The result is a very minimalistic album featuring influences from the Pygmy polyphonies of his homeland, and with Aliana vocally alternating between O'Sananga, English, French and a Pidgin language he calls "Camfranglais". As the title suggests, songs like 'Respect', opener 'Out Of Africa' or 'For Papa' focus on the ancestors and their relationship to contemporary society, nature and spirituality, but elsewhere Erik also explores other themes close to his heart, like migration ('Ke Enda Oko', in which Erik warns against the false Eldorado Europe has become for many African migrants), travel ('Fresh Fruits'), encounters, exile ('Oyé', dedicated to the black descendants of slavery in the Caribbean and beyond), the often too limited knowledge of African history ('A Thousand Names'), the threat of a total civil war in Cameroon because the English-speaking minority in the West wants to tear themselves away from the rest of the country ('Kamit Peace') and even death (closing track 'Nougwé', in which Aliana calls for death not to be feared, but to be embraced as part of life). Tradi-modern West-African poetry set to music.