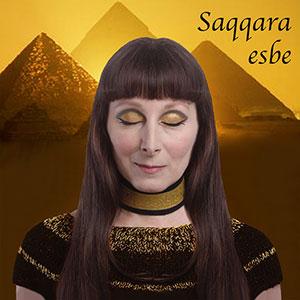 Esbe, a London-based singer-songwriter of mixed North African and Eastern European descent, is a bit of an odd one out in the world music scene, as after studying at the renowned Royal Academy of Music, she started her musical career as a classical guitarist.

However, after being confronted with the rare condition "musician's dystonia", officially called focal dystonia, a form of task-specific dystonia characterized by involuntary spasms and muscle contractions that cause unintentional, abnormal movements and/or postures, she was forced to quit playing her instrument.

These days Esbe combines a singing career with work as a visual artist (mainly influenced by pop art and art deco).

For 'Saqqara', the singer drew inspiration from a journey to Egypt: "Saqqara, the oldest necropolis pyramid in Egypt, is where my journey back to ancient Egypt began. I've always been drawn to North Africa and the Middle East and where modern life connects with our shared origins.".

'My Love Knows No Bounds' tells the story of a young woman dreaming about her lover: "I imagined a young woman dreaming of her lover whilst, with the rising sun a procession gathers around the pyramid. The Arabian leopard, sadly now an endangered species, would have been both feared and revered, a powerful creature she would be in awe of but was prepared to trust her heart to?", 'Carry Me Away' is an ode to the eternal love between Queen Cleopatra and her Roman lover, Mark Antony, and 'Eyes Of Blue' is about blue eyes, which, in a geographical region where eyes and hair normally are dark in color, are still considered the height of exoticism.

Esbe sings in English, but uses scales based on those from Arab music, creating the illusion you're listening to an Arab singer: "As I recorded each song in my north London studio, I was happily transported back to hat glorious hot summer, with visions of Tutankhamun, and earlier still, king Khufu. Processions around the newly built pyramids, then clad in sun-gleaming limestone, became the location for my own personal film song soundtrack.".

However, 'Saqqara', isn't just about Egypt, as Esbe is also a big fan of the work of Pakistani qawwali legend Nusrat Fateh Ali Khan, as illustrated by 'Qawaali Dance' and 'Qawaali Siesta'.

Modern musical version of Orientalism, the romanticized European vision of the Orient, as it was popularized from the second half of the nineteenth century, the time of global colonization by the great Western powers.