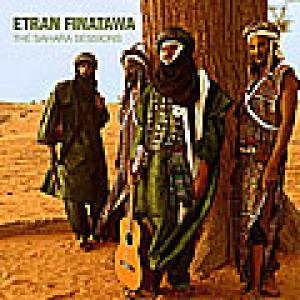 For 'The Sahara Sessions', Etran Finatawa went back to basics as the whole album was recorded in a tent somewhere in the middle of the desert. The fact 'The Sahara Sessions' still sounds as crystal clear as it does, is mainly due to the efforts of producer Colin Bass who succeeded in making his recording equipment survive the harsh desert sands. Although all members of Etran Finatawa reside in Niger, the past year's events in Mali once again pointed out the importance of their message of unity and reconciliation (Etran Finatawa is composed of Tuareg and members of the Woodabe tribe). Opener 'Matinfa' (roughly translated: "what's this all about?') is Etran Finatawa's comment on the unrest and the encroaching fundamentalism in the area. For additional vocals the band appealed on some local children ('Bakuba') and on Abdourahaman Ag Ibrahim, a local griot ('Wa Oyan A Wa Imouss I Bastila').