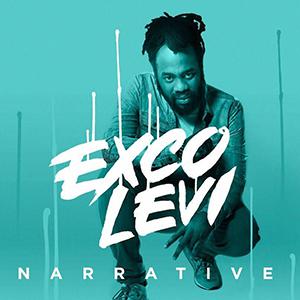 For 'Narrative' Jamaican Canadian Wayneford Omara Levy aka Exco Levi joined forces with German producer duo Silly Walks Discotheque. Not for the first time as it happens, as they already collaborated for 2013's 'Jah Nah Sleep' (Brighter Days riddim) and 2012's 'Storms Of Life', lending its name to the eponymous riddim. But this time the cooperation resulted in a full-fledged album, expertly mixed by Austrian Irievibrations Records' Syrix and with the backing of The Evolution Band (Gentleman's backing band since 2010). Exceptions in the track list are the Donovan Germain produced 'Trouble' (see also Levi's previous long player 'Country Man'), mama tune 'Part Of Me', produced by Toronto based Mike Kfos, and 'Redo', for which Exco collaborated with Raging Fyah. In places 'Narrative' sounds just a tad too polished - 'Don't Cry', a love tune in which Exco Levi cites the titles of a number of Bob Marley-tunes, is the kind of track that really belongs in the pop-charts, and 'My Time' flirts with smooth r&b - but the majority of the tracks on this album can certainly convince. More even, with the great 'Old Capital (Spanish Town)', an ode to his hometown and the talent it sprouted, 'Burn', an excellent combination with Sizzla, and strong tracks like 'Wiseman' and opener 'Nothing At All', Exco is guaranteed a number of surefire hits. Finally, to give the album some recognizability, there are 'Money Can't Save You', for which Levi dusted off the Drop Leaf riddim, and 'Feel Like Dancing', in which Exco used some excerpts from Black Uhuru's 'Party Next Door'. Recommended listening!