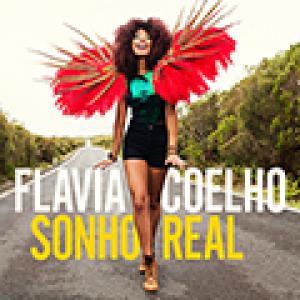 For those who in these grey autumn months are still is looking for a ray of sunshine, 'Sonho Real' ("real dream"), Flavia Coelho's third long player, is definitely recommended. In the liner notes Flavia captures the essence of the album: "By definition our dreams are imaginary, however mine became real.". For this album Coelho joined forces with producer Victor-Attila Vagh and he gave the tracks on 'Sonho Real' a bit more of a reggae vibe ('Bom Bom', 'Quer Vadiar', 'Cê Inventa') than was the case Flavia's previous releases, but off course her songs are still spiced with the necessary Brazilian rhythms as well ('Na Favelha', opener 'Se Ligue'). The most upbeat song from the track list is without any doubt 'Leidi' (even though the poppy 'Geral' is a close second), for which Flavia opted for a ska rhythm. You should already have a good understanding of Portuguese if you want to get what Flavia is talking about in her songs - for closing track 'Temontou' Coelho changes to French just the once - but even we understood that 'Mulher' is a beautiful tribute to womanhood. We truly hope she never gets it into her head to cut off her wonderful curls, but in the dubby 'Meu Cabelho' that's exactly what she sings about, even though the song is actually about love and infidelity. The most autobiographical track on 'Sonho Real' is 'Nada Perdi', in which Flavia tells how she left her homeland to build a music career in a faraway place, losing nothing, but gaining so much.