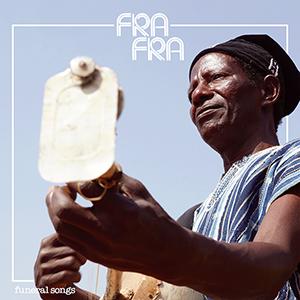 For the next part in their Hidden Musics series, producer Ian Brennan travelled to the far north of Ghana, the traditional habitat of the Gurunsi of Fare Fare, one of the many ethnic groups in the country, to record their funeral songs. It may seem a bit strange in these times of anti-colonialist sentiment, but, as the band name indicates, the members of Fra Fra prefer the colonial name (a corruption of "Ya fara-fara?" or "How are you doing?") to the politically correct Gurunsi or Fare Fare. As in Fra Fra tradition funeral songs are usually sung during processions, studio work was certainly not an option, so Brennan eventually assembled the quartet, led by Small, on the grounds of the School of Hygiene in Tamale, the capital of the Northern Region. Not yet sobered up from their sumptuous pito (a kind of beer made from fermented millet or sorgo) consumption of the night before, the foursome appeared on the morning of the recording, declaring they just played better when they were drunk! This may be a collection of funeral songs, but the music of Fra Fra sounds rather festive. The vocal harmonies certainly form the basis of Fra Fra funeral music, but on this album, you'll also hear accompaniment on the kologo, a one-string "guitar" with dog-tag-like rattles on the neck, bone mouth whistles the musicians call "horns" referring to the material from they're made from, and finally rhythmic foot stomping on the gravel of the terrain where Ian Brennan set up his microphones. Another intriguing piece of fieldwork!