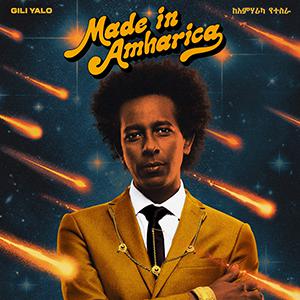 After the success of his self-titled debut album released last year, for this 'Made In Amharica' EP Gili Yalo joined forces with Niles City Sound, an American production team consisting of Josh Black, Austin Jenkins and Chris Vivion. The title of the EP is a play on referring to Amharic; the lingua franca in Ethiopia, but which can also be read as "made in America". The track list features 4 songs, with the English closing track 'Heart Of Gold' not really our cup of tea, but also 'Sew Lesew', about showing humanity towards others, in which Gili refers to the current refugee crisis, national borders and discrimination against newcomers (something he experienced himself as an Ethiopian migrant in Israel), and finally 'Zelel Zelel', a cover of the eponymous song that was a big hit for Aregahegn Worash in the nineteen eighties, a tale of two ex-lovers who meet again on the dancefloor. A delicious inbetweener from our favorite Falasha!