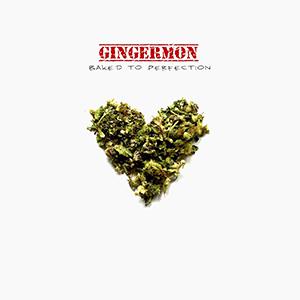 For our first American reggae release of the New Year, we're heading to Cleveland, Ohio, home of Gingermon, the alter-ego of singer-songwriter Tim Gandee, presenting his second album with 'Baked To Perfection'. The title of the album is a reference to "being baked", a synonym for stoned, but is also an allusion to the four years (!) of time and energy Gingermon put into creating this long player. For the songs on 'Baked To Perfection', Gingermon drew inspiration from, among others, the work of Jamaican deejay Tapper Zukie. Both 'Drink Up' and 'Traveling' are songs Gingermon based on riddims he heard on 'In Dub' (Stars, 1976 and reissued by Blood and Fire and Jamaican Recordings in 1995 and 2011), 'Beautiful Dub' and 'Pick Up The Dub'. But if we dig a bit deeper, we end up with Junior Ross' 'Rasta Man' for that first song and The Royals' 'Pick Up The Pieces' for the second. But Gandee also ventured into a cover version of Johnny Cash's iconic 'Folsom Prison', and in opener 'Babylon Say Freeze', together with Brian Marsh, a former member of ska-punk band Broke By Monday and the current guitarist of reggae band Umojah Nation, he goes hip-hop. Our favorites from the track list: ganja tune 'Sativa', the infectious 'Gold Digger', and the delicious 'Right Now', once again Tappa Zukie, this time title track 'Tappa Zukie In Dub', in which we immediately recognized the iconic bass line from Burning Spear's 'He Prayed'. The album concludes with two dubs, one of the aforementioned 'Sativa', and the other, the work of Timothy Boyce aka P-Dub of New York Predator Dub Assassins fame (who was also responsible for much of the production work of 'Baked To Perfection'), a hypnotic dub version of 'One Track Mind', totally obliterating the vocal version, a light-footed song about someone musing about summer during the grey autumn and winter months. Another nice addition to the ever expanding American reggae spectrum!