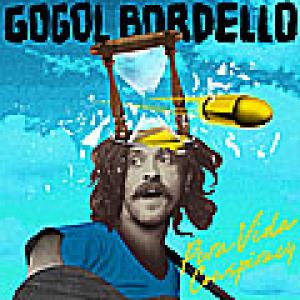 With 'Pura Vida Conspiracy' Gogol Bordello front man Eugene Hütz comes full circle; for the first time in a long time he returned to his mother country Ukraine, a trip to Kiev that brought him to terms with his position as the ultimate outsider. Even though Hütz for 'Pura Vida Conspiracy' once again joined forces with Andrew Scheps , this album sounds a lot rougher and more rock influenced than predecessor 'Trans-Continental Hustle'. The band travelled back and forth between Paraguay, the United States and Mexico, recording around thirty songs of which twelve were eventually selected for this album. Hütz picked up the expression "pura vida" (literally translated "pure life") during his travels through Latin-America and found it reflected Gogol Bordello's identity. Those who can stomach Gogol Bordello's anarchist in-your-face party music will definitely enjoy 'Pura Vida Conspiracy'.