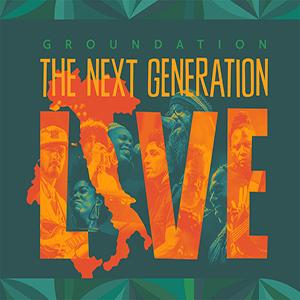 As record sleeves immediately telling the whole story of an album go, Groundation's 'The Next Generation Live' - the first live registration in the band's twenty years of existence - can definitely count.  These are live recordings made during the Italian leg of the 2018 European promo tour for the release of the album 'The Next Generation', and also meant to introduce the new band around front man Harrison Stafford to the public. Even though yours truly had somewhat ignored Groundation 2.0 until now, we have to admit that 'The Next Generation Live' was a very pleasant surprise. The new Groundation lacks the jazz element the band had made their trademark (the masterful keyboard work of Marcus Urani, Ryan Newman's bass lines, the subtle horn lines of trumpet player David Cachere), but instead you get a more than excellent roots sound. In the choice of tracks, we also feared an overload of tracks from 'The Next Generation', but we only found four songs from that album in the track list ('One But Ten', 'Warrior Blues', 'Lion In Man' and 'New Life'). From debut album 'Each One One Teach One' we get 'Jah Spirit', 'One More Day' and 'If I', there's closing track 'Hold Your Head Up' from 'A Miracle', an album we honestly lost sight of, and from 'Hebron Gate', as far we're concerned still Groundation's magnum opus, 'Undivided' and 'Weeping Pirates'. It's especially the long spun out version of that last song that is our absolute highlight on this live album and comes closest to the old Groundation sound. In these times of a total lack of concerts and festival, to some extent 'The Next Generation Live' can serve as a mild substitute.