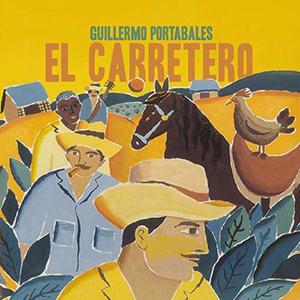 To be honest, we'd rather see a new World Circuit release, but for the time being the label continues to focus on reissuing its own back catalogue. This time it's 'El Carretero', a collection of the best work by Cuban guajira artist Guillermo Portabales; a compilation album that was first released in 1996. Portabales left Cuba for Puerto Rico in 1953, where he would reside until his death in 1970 and enjoyed as much popularity as in his native country. Guillermo's best-known hit, 'El Carretero', wasn't just haphazardly chosen as the title for this compilation, as over the years the song has been re-recorded by the legendary Buena Vista Social Club and even West African artists like Orchestra Baobab and Cheikh Lô, and songs like 'Flor De Amor' and 'El Amor De Mi Bohio' were, among others, revived by Omara Portuondo. Portabales was known as a gifted interpreter of the guajira, a style of music that was initially mostly popular in the Cuban countryside. However, Guillermo completely adapted the genre by slowing down the rhythm and placing more emphasis on the melodic part of his songs, a style that was soon to be described as guajira de salon. A true gem from Cuban music history!