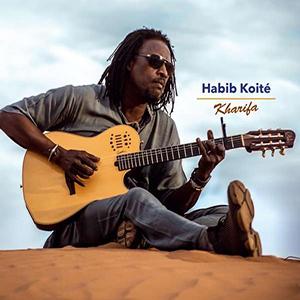 Some twenty-five years after the release of his debut album 'Muso Ko' and five years after predecessor 'Soô', Malian bard Habib Koite returns with 'Kharifa'. Over the years Koite's sound has become much more refined, but the formula has hardly been tampered with. What immediately stands out on 'Kharifa' (Bambara for "what we entrust to you", an appeal to each individual to assume his or her responsibility in society) are the various collaborations with, among others, Toumani Diabate (whose kora can be heard in 'Forever'), Amy Sacko, the wife of Bassekou Kouyate and lead vocalist in his band Ngoni Ba, but also Koite's cousin M'Bouillé Koite and Habib's son Cheik Tidiane Koite, or Guinean guitar legend Sekou 'Bembeya' Diabaté (co-founder of the legendary Bembeya Jazz, whose slide guitar can be heard in 'Forever'). Veteran Boubacar Traore cannot be heard on 'Kharifa', but co-wrote 'Ntolognon' (which appropriately translates as "friendship"). Also striking are the accordion effects keyboardist Charly Coulibaly conjures up in songs like 'Wara', 'Mandé' or 'Symbo', and Habib's banjo in 'Yaffa', a call for more tolerance, seeing Habib go reggae. Our personal favorite on 'Kharifa' is 'Djiguiya' ("hope"), the only song from the track list where Habib's guitar relinquishes its leading role in favor of the horn section, giving the track a groovy vibe reminiscent of Beninese vodoun-funk. In songs like the aforementioned 'Forever' and 'Yaffa', Habib uses a kind of English we usually try to avoid, but apart from that minor flaw, with 'Kharifa', the Malian veteran delivers another beautiful record.