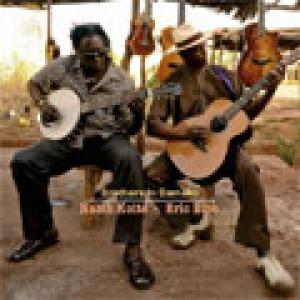 'Brothers In Bamako' is all about the letter combination BIB. First of all, there is of course Contrejour-figurehead HaBIB Koite, who, for the occasion joined forces with American blues and folk artist Eric BIBb, and the title of the album also features that same letter combination. The musical brotherhood of Koite and Bibb goes back to 1998 when they got to know each other during the recording of the 'Mali To Memphis' album (Putumayo World Music, 1999) and in fact, 'Brothers In Bamako' is somewhat of a continuation of that project. Both musically (banjo and ukulele brotherly next to Habib's guitar and Mamadou Kone's fileh or gourd percussion) and content-wise (in opener 'On My Way To Bamako' Eric Bibb sings how nervous he is because it's his first trip to Africa and Habib's answer 'L.A.', learns us of his preference for California's tequila) Bibb and Koite create the perfect symbiosis between American blues and folk and Mali blues. Nothing new as it had already been excellently done by Toumani Diabate and Taj Mahal ('Kulanjan', Hannibal, 1999) or Ali Farka Toure and Ry Cooder ('Talking Timbouktou', World Circuit, 1994), but 'Brothers In Bamako' is a nice illustration of the kind of universal language music is.