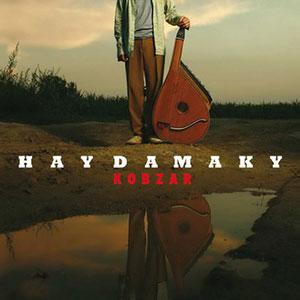 Not an easy one this 'Kobzar' by Haydamaky (the band was named after the Haydamaky-revolution, a popular peasant uprising against the foreign occupation of the Ukraine in the 18th century). Musically speaking there's nothing wrong with this Ukrainian folk-punk rock on the aptly named Eastblok Music label, but the Ukrainian language will not be everyone's cup of tea and 'Kobzar' sounds a lot heavier than the Gypsy music or folk melodies that most enthusiasts of Eastern European music are used to. Haydamaky lifts the genre into the twenty-first century and even for yours truly this took some getting used to, but after a few listening sessions, lead singer Oleksandr Jarmola and his band convinced us. 'Kobzar', the title of the album, is an old name for travelling troubadours who played, among other things, the bandura (a traditional Ukrainian zither), related to the instrument that is also on the cover of the album. A discovery!