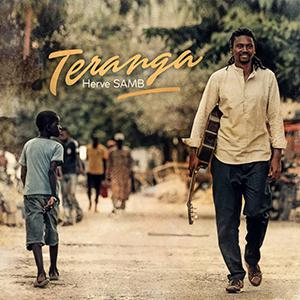 Herve Samb is a Senegalese guitarist, composer and producer who started his musical career performing in Dakar's club circuit. Samb was fascinated by Western blues and rock ever since he was a child, but when Belgian guitarist Pierre van Dormael crossed his path, with jazz a whole new musical universe opened up. In 1998 Samb relocates to Paris and a few years later decides to cross the ocean and explore New York. Hervé has always preferred the street over the academy, creating a unique style of his own: "I have found my voice in the fusion of traditional African music with elements of jazz, rock and classical music…". Over the years Herve Samb has accompanied artists like Amadou & Mariam and Oumou Sangare or Aziz Sahmaoui and Jimmy Cliff, but also continued to build a solo career. In 2009 he presented his aptly titled long player debut 'Cross Over', in 2013 followed by 'Time To Feel', and now there's this third album. 'Teranga', dedicated to Senegalese master drummer Doudou N'Diaye Rose and Orchestra Baobab vocalist Ndiouga Dieng (the latter is still featured in closing track 'Denianke'), can be translated from Wolof as "hospitality", but in the context of this album should rather be read as being open to outside influences. 'Teranga' opens with the light-hearted 'Thiosanne' (Wolof for "tradition" or "culture", see also the similar instrumental 'Dem Dakar'), jazz meets sabar-percussion setting the tone for the rest of the album. 'My Romance/Sama Leer', featuring Senegalese vocalist Adiouza, is clearly influenced by Brazilian bossa nova, and for 'Saaraba' (a medley of 'Saaraba', 'Dienewally' and 'Ñaani Bagn Na', three Senegalese traditionals, a category 'Bireum Yaasin Boubou' also fits into), featuring Souleymane Faye on vocals, Samb mixes sabar-drumming with a classical string quartet and jazz guitar. With 'Tasé' ("encounter"), a song Herve already wrote when he was still in his teens, thanks to the presence of Daara J also features influences from hip-hop (see also 'Niouk' in which Herve compliments his jazzy sabar-style with vinyl scratching, and 'Giant Steps/Bëg Tekki', based on John Coltrane's jazz classic, featuring rappers N'dongo D and Mike Ladd). With 'The Days Of Wine And Roses' Samb opts for a reinterpretation of a song Henry Mancini wrote for the score of the 1962 Blake Edwards movie of the same name, and he does the same with 'There Will Never Be Another You/Bara Mbaye', originally a composition by Harry Warren from the musical 'Iceland' (H. Bruce Humberstone, 1942). Delightful album to be enjoyed on a sunny Sunday morning!