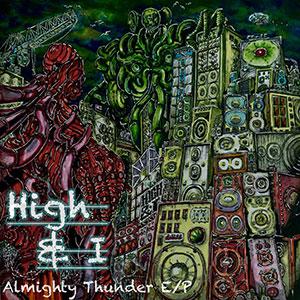 High & I is the alter ego of Chris Nottingham, a dub producer from Middlesbrough, England. That being said, Nottingham started out in the punk scene and is still active as a drummer with Almighty Uprisers, a punk band from Newcastle.

When last year Chris discovered the local sound system scene, he was immediately impressed by the feeling of unity and love he experienced there and, of course, the sheer power of the basses.

A year later and Nottingham is the driving force behind Teesside Dub Club, before the COVID-19 nightmare started, a bimonthly dub event in Middlesbrough, and started this High & I project.

With 'Almighty Thunder', a title referring to the thundering basses in dub, he now also presents a first, 9 track EP. In the track list, two vocal cuts (for which he invited Micky Sparra/Sparrow, his band mate and vocalist in Almighty Uprisers), three instrumentals and four dubs.

As far as the vocal versions are concerned, we really recommend Chris to practice his mixing techniques a bit more, as Micky's voice is a bit blurred out by the heavy basses and other instrumentation. The remaining instrumentals and dubs are all heavy digital dub compositions the UK is known for, so no complaints there. Newcomer to the dub scene to keep an eye on!