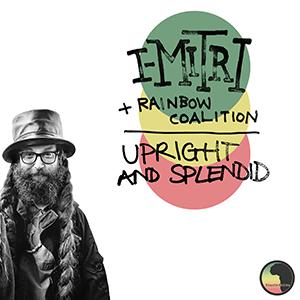 'Upright And Splendid' seals the partnership between UK based Greek Jack of all trades I-mitri and the Dutch Rainbow Coalition (Tim Baumgarten of Slimmah Sound and Roots Tribe). I-mitri (real name Dimitris Moraitis) started his musical career in the late nineteen nineties as a member of the Athenian sound system/dub label AMP Outernational and the Dubwise Hi-Fi collective. In 2001 I-mitri moved to Leicester in the UK, where, in addition to his weekly radio show United Nations of Dub, in 2006 he founded the CounterAction Soundz label together with Richi Rootz, and in 2013 was one of the founders of the annual indoor dub-event United Nations Of Dub Weekender. 'Upright And Splendid' is conceived in showcase style, counting five vocal cuts and as many dubs/instrumentals, with I-mitri and Rainbow Coalition perfectly managing to maintain balance between digital and analogue. Recommendations: the catchy 'The Movement', 'Rise In Love', with the hypnotic rhythm of the repeater or keteh taking you to higher spheres, and finally title track 'Upright & Splendid', a delicious UK stepper. Recommended listening for dubheads, but also a must for regular reggae amateurs. Anakálypsi (discovery)!