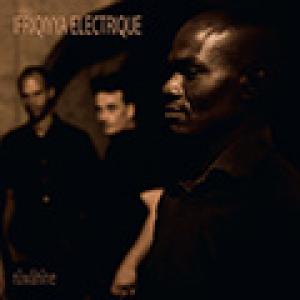 For Electricque Ifriqiyya (during the middle ages Ifriqiya or Ifriqiyah was the name for the coastal region of present-day eastern Libya, Tunisia and Algeria), guitarist François Cambuzat and bass player Gianna Greco (Putan Club) joined forces with local musicians - Tarek Sultan, vocals/nagharat/nagharat/krakebs, Yahia Chouchen, vocals/krakebs, Youssef Ghazala, vocals/krakebs - from the Tunisian Banga-community. The Banga are the descendants of the former Hausa-slaves in Tunisia and are known for the ritual of Sidi Marzûq, performed annually in Tozeur, an oasis town on the edge of the Chott el Djerid, a huge salt lake in the east of Tunisia. The rûwâhîne referred to in the title of the album, are the spirits taking possession of the participants during the ritual. Ifriqiyya Electrique is more than a music project though, as François Cambuzat also filmed the ritual and the recording sessions for the album, resulting in a fascinating documentary. Asked about the project, Cambuzat describes Ifriqiyya Electrique as follows: "This is, then, most certainly not a" world music "project (still less an ethno-musicological one), but a wild process of improvisation and re-composition that brings traditional instruments face to face with computers and electric guitars ... [My work] is driven towards elevation, sweat, blood, poetry and tears-not to some pretty color postcard ". Centuries-old trance ritual catapulted to the twenty-first century!