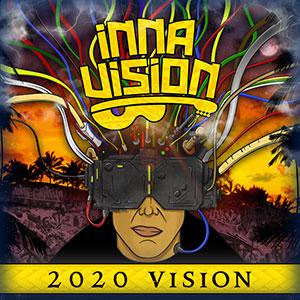 After last year's 'Best Of' compilation 'Best Yet: Celebrating A Decade Of Vision', Inna Vision is back with '2020 Vision', a new long-player, definitely rating as one of his best releases to date.

The title of the album can be seen as a play on words, as '2020 Vision' means something like "perfect vision", but of course the title also indicates that this album also represents Vision's view on disaster year 2020, with the cover image a clearly indicating that we've mainly spent this past year looking through virtual glasses.

In the intro, we first get a fiery statement against the ongoing American colonization and occupation of Hawaii, taken from the intro of the documentary 'Act Of War: The Overthrow of the Hawaiian Nation' (Nā Maka o ka 'Aina, Puhipau and Joan Lander, 1993): "We are the Hawaiian people. These islands have always been our home. We were sovereign over this land before there was an England, long before there was a United States. By the nineteenth century, our independent nation was recognized by the dominant powers of the world. And in 1893, in an act of war, in an armed invasion, and in violation of international law, our nation was taken. And we have been compelled, against our right to self-determination, to become United States citizens.".

'Don't Waste No Time', which had already been released as a single previously, is an excellent new roots combination tune featuring Million Stylez. For 'Work Harder', Inna Vision goes roots, and the rub-a-dub of 'Stick To Ya Roots' is in the same vein (an acoustic version of the song is featured elsewhere in the track list). 'Spazz', which also saw a single release, is a typical autobiographical Inna Vision tune (be sure to check out the accompanying self-deprecating video clip, showing Vision tackling some of the cliché questions he's often faced with in interviews). The more downtempo 'Push Over' is a collaboration with the Virgin Islanders of Bambu Station, and certainly one of the highlights from the track list. 'Got You' featuring label buddy Gonzo is a light-hearted soulful love song. For the similar 'Next Gyal', Inna Vision for some reason used a Santana-like guitar solo, not immediately making it our favorite song from the track list. The jazzy 'A Team', immediately reminded yours truly of Guru's nineteen nineties hip-hop meets jazz experiments, and even more straightforward hip-hop is 'I Believe'.

The fact Inna Vision hasn't forgotten his Hawaiian roots, he proved already with the intro of this album, but duets with local artists like Kanakamon ('Pay No Mind') and Kayamon ('Understand', Inna Vision's reaction to the events that eventually led to the worldwide Black Lives Matter protests) prove that he also maintains close musical ties with the archipelago where he was born.

Another enjoyable duet is 'Your Soul', this time featuring E.N. Young, who in good tradition can also briefly be heard on melodica.

Inna Vision concludes in spoken word style with 'Essence', at the same time looking back on 2020, thanking his fans and a shout out to all his musical and other friends who, over the years, helped him pave his musical path. Another strong and varied production by this Hawaiian tower of strength!