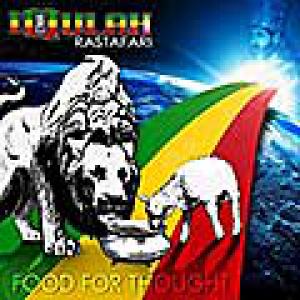 IQulah (an acronym that stands for Integrity, Quality, Unity, Love, Africa and Home) belongs to a select group of Jamaican reggae musicians with a firm footing in the Rasta community, who despite of (or perhaps because of) their limited output have acquired a cult status (see also Kiddus I or Junior Byles). 'Food For Thought' is but the sixth album IQulah, due to his activities with the United Nations and for the Ethiopian World Federation also known as the "Rasta Ambassador", has released since his 1989 debut effort 'Rasta Philosophy'. As we already mentioned, the "Q" in Iqulah stands for "quality", so on 'Food For Thought' we're presented with twelve rock-solid roots tracks with a remarkably balanced instrumentation: a heavy bass sound, nyahbinghi percussion where necessary and even a supporting violin. We were most taken by solid opener 'Back In The Day' and the UK steppers-influenced 'It Is I', but please feel free to make your own selection! We may only be at the beginning of February, but we're convinced that with 'Food For Thought' we've already come across one of the best roots albums for 2015!