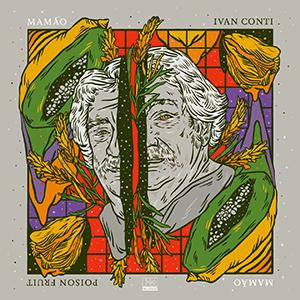 Ivan 'Mamão' Conti's 'Poison Fruit' was originally released early 2019, and was the Brazilian drummer's first solo album in over two decades (and his first after the 1984 classic 'The Human Factor'). The album is now being re-released on so-called "poisoned" or spotted vinyl, and comes with a free 7inch featuring 'Katmandu', a song from the 'Poison Fruit' sessions, and 'Ninho', which sees its first vinyl release. Until further notice, Conti is still a member of Brazilian jazz funk trio Azymuth (and Alex Malheiros and Kiko Continentino can also be heard on this album), but also counts as a gifted solo artist. The track list features 11 songs in which Conti alternates between electronic samba ('Ecos Da Mata'), jazz ('Encontro') and electronic dance beats (title track 'Poison Fruit'), supplemented with 6 remixes by, among others, Berlin based DJ Glenn Astro and Max Graef, British soul artist Reginald Omas Mamode IV, and, of course, Dokta Venom, the alter ego of Daniel Maunick, who produced the album together with Ivan's son Thiago Maranhão. Excellent long-player by one of the fathers of the samba daido!