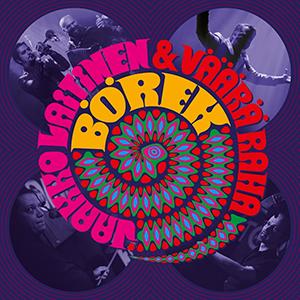 Jaakko Laitinen & Väärä Raha have already produced four previous albums featuring their typical highly infectious mix of Finnish schlagers with Balkan influences. 'Börek', the title of this new long-player and the name of a pastry dish which originated in the Ottoman Empire and is still popular in Bosnia, Turkey and all the countries in between, is a direct reference to the regions these crazy Finns love so much. This time the thread running through this album seems to be travel, from 'I Tåget Finns En Restaurangvagn', Swedish for "There's a restaurant car on the train" and for many Finns one of their favorite Swedish expressions as it's synonymous with the promise of adventure and excitement, over 'So-so', in which drummer Janne Hast states the journey is often more important than the destination, to opener 'Kotimaka', about the longing for home, inevitably raising its head after a while, and even the dark 'Madonruokaa', in which death symbolizes the ultimate homecoming. Quickly buy yourself a ticket and hop aboard this party train between Finland and the Balkans!