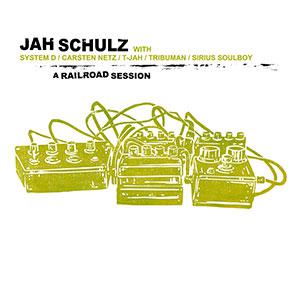 Jah Schulz (real name Michael Fiedler), a musician and producer from Stuttgart, might well be the new German dub revelation. Schulz' great examples are dub legends like King Tubby, Mad Professor and Adrian Sherwood, and on 'A Railroad Session' influences from each of them can be heard. No vocals on this release, but Schulz invited some musician friends and fellow producers. In 'Mentally Tougher By Using Dub' and 'Dub To The Fjord' Carsten Netz's saxophone can be heard, and it's Tribuman's trumpet that echoes in 'Rise Up', a song that was already previously released as a 7inch, but on 'A Railroad Session' appears in a remix version by T-Jah, a dub maker from Chemnitz. Behind 'Go See The Dub', a song that Schulz recorded in collaboration with Moroccan band System D, hides a nice anecdote. Schulz go to know the band members when after a set at the German Fusion Festival his car wouldn't start and they immediately offered him a helping hand. Most experimental sounds closing track 'Afrikan Powa', recorded with Berlin based DJ and journalist Sirius Soulboy. Jah Schulz may not be the coolest sounding pseudonym in reggae history, but if dub is your thing, you'd better remember the name!