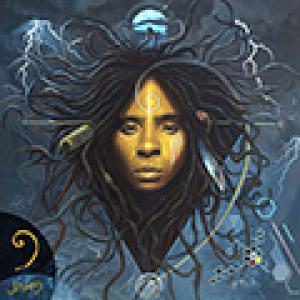 Fans of numerology can indulge to this '9', the new long player by Janine Cunningham aka Jah9, because where this album is concerned, it's all about the number "9". In addition to its title, the album was released on September 9th, the track list counts exactly 9 songs and with 'In The Spirit' Jah9 even included one that lasts - you guessed it - nine minutes and ends in an enjoyable percussion and flute outro. About the number "9" Jah9 has the following to say: "Nine is the number of change, because after nine it starts all over and a new cycle begins... This record is 9 for 9 all that means. For all that I am as well. ". For the album Jah9 collaborated with a range of producers. Of course there's opener 'Humble Mi', produced by our very own Bregt 'Puraman' Deboever, but Franklyn 'Ben Up' Irving, responsible for 'Unafraid', a song over The Gladiators' 'Can't Stop Righteousness' in which Jah9 fulminates against sexual abuse of minors, and Kevin Campbell, son of veteran Al Campbell, who produced the aforementioned 'In The Spirit', also contributed. For the feminist statement and closing track 'Greatest Threat To The Status Quo' ("A spiritual woman is the greatest threat to the status quo...") Jah9 joined forces with I Grade Records producer Laurent 'Tippy' Alfred. Like yours truly, you will undoubtedly already have noticed Jah9's musical style is heavily influenced by the reggae produced on the US Virgin Islands. It should therefor come as no surprise that the only guest vocalist on this album is none other than Vaughn 'Midnite' Benjamin. For those looking for a solid dose of spirituality and introspection, '9' comes more than recommended. Another one for our top ten for 2016!