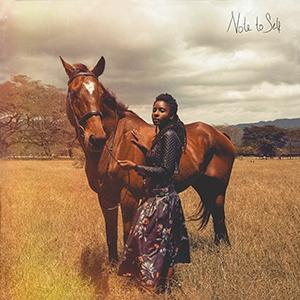 As the title suggests, on 'Note To Self', her third long player to date, Jah9 goes on a journey of introspection.

Jah9: "I'm always on a course of study, whether it's through self-study or teaching and studying others or through social experimentation". Still, she wanted this album, for which she collaborated with veteran producer Clive Hunt, to sound a little more accessible than its 2016 predecessor '9' or the jazzy 'Feelings' EP from 2018: "I wanted to do something that was a little more accessible in terms of music than previous work and inspire introspection. It is a thought-provoking album. Each song is a note to myself. Hopefully, people will listen to the album and relate to the themes; gain some benefit from seeing how I deal with my issues.".

Apart from Clive Hunt, 'Note To Self' also features productions from producers like Runkus, Iotosh Poyser, Teflon, Jeremy Harding and once again a Belgian touch thanks to the contributions of Bregt 'Puraman' Deboever, who produced the riddim for 'Could It Be Me' and provided the horn arrangements for 'Field Trip'. For the vocal part, Jah9 called on Tarrus Riley, Chronixx and Pressure Busspipe, and for 'New Race (A Way)' the Jamaican singer collaborated with British rapper, author and television maker ('Roots, Reggae, Rebellion', 'Akala's Odyssey'...) Akala.

If the cover picture of 'Note To Self' still reminded us of a nu-folk album, then VP-records summarizes Jah9's sound as Mutabaruka meets Tracy Chapman and Erykah Badu, and listening to the stylistically divergent tracks on this long-player, we’re inclined to agree (even though we'd rather see Tracy Chapman's name replaced with that of Lauryn Hill).

'Note To Self' opens with 'Heaven (Ready Fi Di Feeling)', a sturdy roots revival anthem and immediately one of our favorites from the track list. 'Ma'at (Each Man)' is a typical Jah9 song, as could be found on one of Jah9’s previous long players, but with songs like 'Field Trip', title track 'Note To Self (Okay)' (the duet with Chronixx) or 'Could It Be', Jah9 enters the nu-soul universe of Erykah Badu, the hip-hop vibes of the excellent 'New Race (A Way)', the combination with Akala, took us all the way back to 'The Miseducation Of Lauryn Hill', Lauryn Hill's iconic solo debut (already dating back to 1998!), and 'Could It Be' is pure old school soul. At first sight, 'Love Has Found I', is a delightful love tune, but at the same time it doubles as an ode to His Imperial Majesty Haile Selassie, with the sound of Sheldon Bernard's flute adding an extra dimension. Also a love tune, and thanks to the Jeremy Harding produced riddim, way more upbeat than the rest of the tracks on 'Note To Self', is 'You And I', the duet with Pressure Busspipe. But Jah9 isn't afraid to confront certain men with their inappropriate behavior if necessary, and she does so with gusto in 'Highly (Get To Me)', a song she says she penned years ago, but never found the right riddim for until she stumbled upon the one provided by Runkus and Iotosh Poyser, and in which she deals with the behavior of alpha males still under the false impression the #MeToo limit doesn't apply to them.

Jah9 concludes somewhat contradictory with 'The Beginning', a short spoken word outro. The release of the album is accompanied by 'Note To Self - An Introduction', a mini-documentary of about 15 minutes directed by Fernando F. Hevia & Samo Kush (and for those interested in small details, there's a Belgian note here as well, in the form of a small portrait of Haile Selassie painted by Belgian reggae fanatic and photographer Fabrice De Smedt, which comes into view about eight minutes into the video). This year the Reggae Grammy will once again go to a woman!