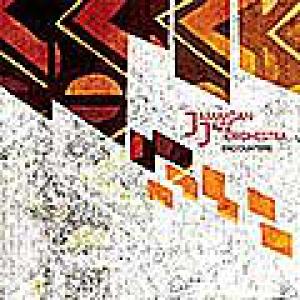 The first thing that came to mind when listening to 'Encounters', Jamaican Jazz Orchestra's debut long player, was: "Damn, this sounds great!", and hardly anything about this album hints at the fact that this is a Belgian production. We're all too aware that with that previous statement, we might sound a tad disparagingly towards Belgian ska and reggae productions, but in fact yours truly merely wanted to accentuate the international character of the tracks on 'Encounters'. The songs on 'Encounters' definitely sound a lot jazzier than the ones on their 2013 self-titled debut EP, tying in wonderfully with Sarah Devos' sultry voice (unfortunately we only get to hear her voice in all its splendor in opener 'Lions'). Just as for 'Afro Steppers' on their debut EP, on 'Encounters' Jamaican Jazz Orchestra once again goes African with 'Ungawe'. With a title like 'Encounters' we were half expecting an album featuring a host of guest musicians, but apart from 'Nyah Vibes', a delicious slow nyahbinghi instrumental (and also our favorite song from the track list) for which Wouter Rosseel called on percussionists Mario Nuñes dos Santos, Bregt 'Puraman' De Boever, Falasha Isis and Steven Vancoillie, that didn't appear the case. Even though it's tastefully done, the cover design of 'Encounters' rather gave us the impression this was an afro-jazz album, so a slight Jamaican touch wouldn't have been out of place. However, these are mere details, and we'll gladly award 'Encounters' a spot in our top ten for 2015. 'Encounters' only counts nine tracks, so you'll definitely need the repeat button. Wheel up and come again Jamaican Jazz Orchestra!