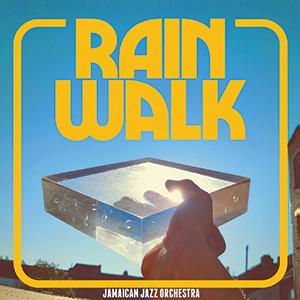 Just under five years after the release of their well-received debut album 'Encounters', Jamaican Jazz Orchestra returns with 'Rain Walk', an album that may sound even more sophisticated and mature than its predecessor.

Like its predecessor, 'Rain Walk' is also mainly instrumental in nature; the album title still holds a deeper meaning: even if it rains - whether literally or in your head - you can always try to get over it by focusing on something else. 'Rain Walk' might leave real ska-amateurs a bit dissatisfied, but instead we get some great instrumental reggae, rocksteady and even some nyahbinghi (title track 'Rain Walk'), always topped with that typical jazzy touch the band has to offer.

The genius of bandleader Wouter Rosseel is reflected in the fact he allows the different musicians in the band to shine in long solos, just like it's meant to be in a jazz formation. The one time keyboardist Karel Cuelenaere may pull out all the stops (like in opener 'Monkey See Monkey Do' or 'Earth Tones'), then it's the turn of trumpeter Marie-Anne Standaert ('Queen Of Hearts') or trombonist Tobias Storme ('Mordan'), and elsewhere it's Rosseel's own guitar ('Few Cashew').

Singer Sara Devos has disappeared but for 'Morning Girl', the only vocal cut on 'Rain Walk', she was replaced by Belgian-Brazilian singer Helena Casella. The lyrics for that song, which was released as a single earlier this year, were written by Helena's uncle, Pablo Casella, known for his work with Sarah Ferri and Little Dots.

We certainly enjoyed this musical walk in the rain very much, but if our opinion doesn't bear enough weight (or leaves you indifferent), then there's always Jamaican guitar veteran Ernest Ranglin who described 'Rain Walk' as follows: "Lovely album, lovely tunes and some real fine musicianship!", and who are we to question the words of the master?