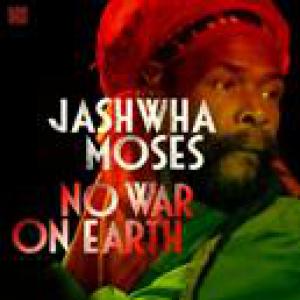 Thirty years, that's how long it took for Jashwha Moses' debut album, 'Joshua To Jashwha: 30 Years In The Wilderness', to see the light. Moses has not been resting on his laurels though, and, only a year later, he already presents his second long player 'No War On Earth', an album heavily influenced by Bob Marley's oeuvre: 'Good Over Evil' is an interpretation of Marley's 'War' and 'Do You Believe In Love' and 'Power Crazy People' are versions over a riddim of a Marley song ('Concrete Jungle' and 'Exodus'). 'Jah Time Has Come' and 'Steel' are updates of songs that could already be found on 'Joshua To Jashwha: 30 Years In The Wilderness'. Finally, fans of a good UK stepper will enjoy 'Sign Of The Times'. Even though 'No War On Earth' is less surprising than predecessor 'Joshua To Jashwha: 30 Years In The Wilderness', Moses proves himself again with this solid portion of UK roots or as Jashwha himself calls it: jahggae!