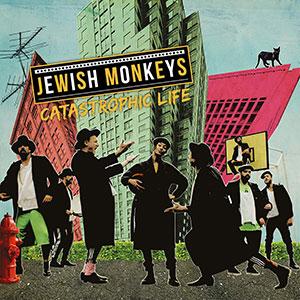 Yours truly got to know the Israeli Jewish Monkeys thanks to the release of their 'High Words' album in 2017. On 'Catastrophic Life' the eight-piece band once again serves up its quirky mix of typical Jewish humor, socio-critical lyrics and punk attitude. In the songs on this album they question, among others, the ever increasing digitalization of our society, in which screens and algorithms influence almost all of our decisions ('The Robot Age'), they try to come to terms with their advancing age (closing track 'Can't Get It Up'), and with 'Punkfurt' they bring an ode to Frankfurt, the second home of the band and the place where it all started for Jewish Monkeys. Musically, this time the gentlemen enriched their mix of punk ('Punkfurt', 'Too Little Too Late'), klezmer ('Golden Tooth'), rock and ska, with influences from reggae meets swing jazz (opener 'All The Great Things'), funk ('The Robot Age'), with the French 'Le Grand Bazar' even a dash of afrobeat, and for the catchy 'La Mariquita' ("the ladybug") - Middle East meets Central America - Jewish Monkeys even switch to Spanish. In finding the almost perfect balance between different genres, languages and cultural influences, Jewish Monkeys once again prove to be the ideal embodiment of the colorful Israeli music spectrum.