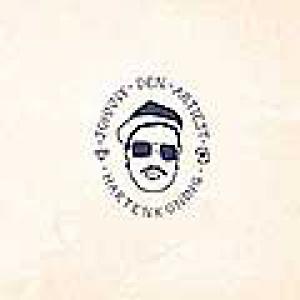 If we tell you Johnny den Artiest (Arnoud Judong) crowned himself king of Flemish reggae now almost 7 years ago, you'll agree his fans had to show some serious restraint waiting for the release of this debut album. But as the Jamaican proverb states: "Good things come to those who wait!", and with a track list counting no less than twenty songs Johnny definitely offers his fans value for money. The accusation that Johnny den Artiest a gimmick or a joke would be out of control we can with this release then also print the header in forever. The album is actually split into three parts: first, there are the tracks recorded with Asham Band (opener 'Zoveel Schoon Vrouwen' over the Far East riddim, the infectious 'Tijd Dat 't Zomer Wordt', the solid 'Superheld' over a revamp of the Fresh riddim, 'Stengeleuh', a ska tune with a touch of slackness over the riddim of Jackie Opel's 'Push Wood', 'Dicht Hier Bij Mij' Johnny's version of the Toots & The Maytals-classic 'Monkey Man'...), followed by a number of excellent dub versions ('Zoveel Schoon Dubs', 'Dub Van In Den Tijd'...) and the album concludes with a number of songs for which Johnny used a number of classic riddims ('Alles Wak Wil' over Baby Why, 'Luchtmatras' over the riddim to 'Napoleon Solo' by Lynn Taitt & The Jets, 'Vandaag Gonnek Traag' over Melody Life, party starter 'Kpak A Mee' over Wear You To The Ball, 'Tkost Zweet' over Swing Easy...). Judging from the number of songs on 'Hartenkoning' ("king of hearts") dealing with women or matters of the heart ('Zo Veel Schoon Vrouwen', 'Spijt Van In Den Tijd', 'Jaloers', 'Alles Wak Wil'...), we can't but conclude Johnny den Artiest is in fact a covert lovers rock crooner. Of a very different order is 'Noorderburen', a ganja-tune supported by a slow melodica-rhythm (performed by Johnny himself!) that seems to imitate the influence of the green herb. Not included in the track list is big hit and duet with Halve Neuro 'Shopping In Den Aldi', something yours truly finds somewhat regrettable (and tracks like 'Beter Bij Mij', 'Vrijen Vandaag' or 'Wijn Op Me' also didn't make the cut). We were most taken with party tunes like 'Ze Willen Allemaal' of 'Kpak A Mee' featuring trusted sidekick Etranjay, and the biographical 'Tkost Zweet' also hits the mark, but feel free to decide for yourselves which of Johnny's tracks you'll allow to conquer your heart!