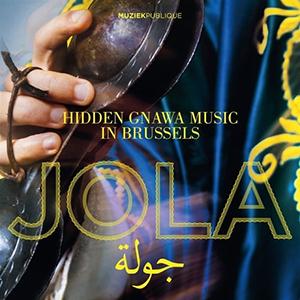 It's probably little known, but the Belgian capital is home to some forty Moroccan gnawa musicians who are now united in the JOLA project (the result of the PhD research of musicologist Hélène Sechehaye as part of her thesis at the Université Libre de Bruxelles and the Université Jean Monnet). In Moroccan Arabic, jola stands for "the tour", an initiation rite in the tagnawit ("the way of the Gnawa"), because even though each pupil is trained by a specific master, his training is only considered completed when he has done a tour of the Gnawa by travelling from town to town to meet other musicians, learn other techniques, discover other sound worlds or think differently. In Brussels, this translates into a meeting of young musicians with accomplished masters, in which an accent from Tangier blends with the dialect from Fez or even some "Maroxellois" can be heard ('Mulay Brahim', 'Mulay Ahmad', both songs dedicated to Sufi saints). The structure of the album follows that of a līla or "night", the nocturnal ritual of the Gnawa. Step by step, the listener follows the musicians on a spiritual initiation journey, rocking on the conjuring tones of the guembri and built around a repertoire divided into four main parts, each linked to a specific event: the sacrifice or ḏbīḥa, the drum procession or 'āda ('Arāda/The Invitation'), the festive dances or frāǧa, and the trance or mlūk, the moment when the spirits take possession of the bodies of the participants ('Ftah Ar Rahba/The Opening', 'L Kūhal/The Black Ones', 'L Mūsāwiyīn/Companions Of Moses', 'L Hūmar/The Red Ones'). The etymological origin of the word "gnawa" are uncertain: one source claims that it's a corruption of the Berber term ignawen, meaning "deaf-mute people", and used to describe black people who did not speak the Berber language, but the term might also have been derived from Berber akal-n-iguinaouen, which can be translated as "the land of blacks" (also forming the basis of the names of West African nations like Guinea or Ghana). What's also certain is that the Gnawa are descendants of black tribes who migrated north or black slaves, nicely illustrated on this album in opener 'Ulād Bāmbara (The Children Of The Bambara)'. We will not elaborate on the content of the different songs on 'Hidden Gnawa Music in Brussels', but the voluminous liner notes of the album (once again the work of Hélène Sechehaye) are a real treasure trove of information both in Dutch, French, English and Arabic. A very strong piece of Belgian-Moroccan music ethnography!