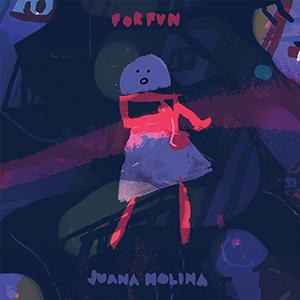 As far as the genesis of the four tracks on this 'Forfun' EP is concerned, the proverb "to make a virtue out of necessity" certainly applies, because when Juana Molina and her band had to play at the Roskilde Festival in Denmark in July 2018, their entire backline proved missing upon arrival. Only armed with Juana's guitar, an already present keyboard and a drum kit, they decided to take their chances and finally performed a wild, largely improvised, set of Juana's songs. One of those tracks, a solid punk version of 'Paraguaya', has meanwhile become a fixture in Molina's live sets and formed the basis for this 'Forfun' EP, for which Juana, as the title suggests, just for fun picked some songs from her repertoire (the aforementioned 'Paraguaya Punk' and 'Un Dia Punk' from Juana's 2017 'Halo' album, and 'The Punkish Rat' and 'Vagos Punk' from predecessors 'Wed 21' and 'Un Dia') and gave them a punk revamp.