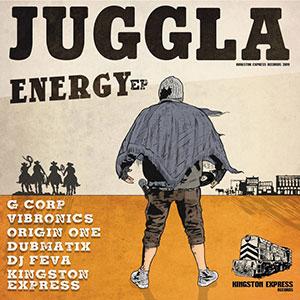 This 'Energy' EP is the solo debut of Birmingham based Michael 'Juggla' Madden, best known for his work with German Noiseshaper and as MC for Birmingham based Overproof Sound System. In the track list 6 songs, each a collaboration with a different producer. For the downtempo melodica roots of closing track 'Lies & Fiction' that's Kingston Express Records' Joe Simpson himself, but other tracks were produced by Dubmatix (the excellent ode to rub-a-dub 'Rub A Dub Style'), Steve Vibronics, Origen One (the solid 'Nice Up The Dance', exactly living up to its title), G. Corp (the digital beats of title track 'Energy', also featuring a vocal contribution by Naivasha, daughter of Brian Nordhoff of G. Corp, formerly Groove Corporation) and DJ Feva. The whole EP was mastered by Ed Rome, the Jack of all trades from Billericay in Essex we already introduced you to a few months ago. Excellent first calling card by a seasoned artist who doesn't really have to prove himself anymore.