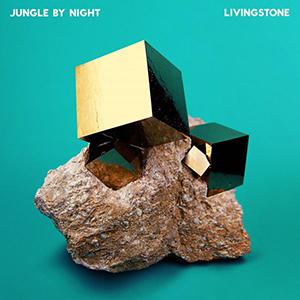 One could compare Dutch band Jungle By Night with Brazilian Bixiga 70, as both bands play a purely instrumental repertoire and just as the sound from São Paulo based band Bixiga 70 in recent years has evolved from fairly pure afrobeat to a layered puzzle of different musical influences, the boys from Amsterdam have not been idle either, and spiced up their original recipe of Ethio-jazz and afrobeat with influences from krautrock, electro and jazz. They already mentioned this musical journey of discovery on predecessor 'The Traveller', on which influences from the oeuvre of artists like minimalist Philip Glass and Turkish rock singer Barış Manço could be heard, and with this album Jungle By Night likes to draw a parallel between their musical journey of discovery and the expeditions of adventurers like Stanley and Livingstone, also explaining the title of the album and the sleeve image, as apart from "fool's gold", is also one of the nicknames for the mineral pyrite often mistaken by miners for real gold. Musically speaking the one track on 'Livingstone' (opener 'Hammock' that does exactly what the title promises) sounds a tad more accessible than the other (the diptych 'Spectacles Pt. 1 & 2'), the one-time leaning more towards classical afrobeat ('Pompette', 'Love Boat') or Ethio-jazz (the already mentioned 'Hammock', 'Yes Precis'), but thanks to keyboard player Pyke Pasman always with an electro undertone, and in 'Stormvogel' once again clearly inspired by the Turkish psychedelia of the late nineteen sixties and early seventies. May this gang continue to explore musical horizons for a long time to come!