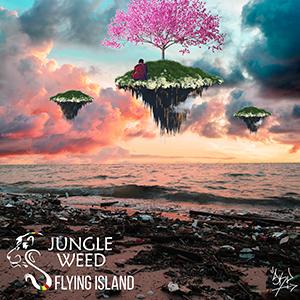 With 'Flying Island', the Universal Egg label is finally presenting an album release by another artist than Zion Train themselves again. Jungle Weed aka Dub Trotter, is the alter ego of Jules Deville, a dub producer and globetrotter from Toulouse in the south of France. The track list features ambient dubscapes like 'Teaching' (in which the voice of English guru Sally Pulling aka Chung Fu can be heard) or 'Tsunami' (for which Deville used a number of radio fragments about the tsunami disaster in Fukushima, Japan), more industrially sounding heavy dubs like intro 'The Way' or 'Katoum', but also a number of vocal cuts for which Jungle Weed collaborated with a whole series of guests ranging from UK based Jamaican Tall Heights Rich ('Time After Time', one of our favorites from the track list, thanks to the excellent trombone parts by Tim Bamber) over Martiniquais Niggle, who with 'Si Tension' ("under pressure") provides a dash of French Creole, and Spanish singer Moon Mermaid, a member of Bass Etxea Sound System from Denia near Alicante, making an appearance in the energetic closing track 'Forest Monster', to twelve-year-old Tara, daughter of co-producer Jerome O'Connell of J Roc Music, who together took care of the vocals in 'Sun Up In My Mind'. As with his previous releases (2015s 'Khumb' and last year's 'Chaudhry Diary', both released on the ODG label), for tracks like 'Land Of India' featuring Indian sound system selector and MC Sanyas-I (born Kiran Borker) on vocals and the Dagga General Remix of 'Coral Gate', Dub Trotter, who clearly didn't steal his nickname, drew on influences from his travels to India. Highly recommended listening for sound system heads!