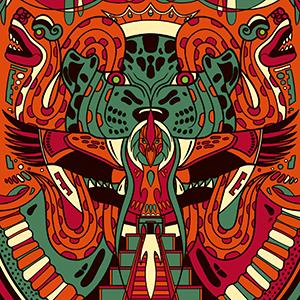 With various releases from artists and bands like La Yegros, Sonido Gallo Negro, Bareto and Cumbia All Stars, we've already proven that in Latin America cumbia is alive and kicking again, and Junglelyd, a formation around Danish DJ Kenneth Rasmussen (whom we got to know thanks to 'Queens And Kings', his collaboration with Ghanaian musician Atongo Zumba for the African Connection project) who's now creating his own version of the genre. This self-titled album has become a real treat for the ears, counting 11 tracks in which Rasmussen always manages to find the perfect balance between electronic beats and analogue instruments. After cumbia nothing more Colombian than coffee (or it would have to be an illegal white substance), and with opener 'Coffee', Junglelyd presents an instrumental ode to the black gold. The track list of 'Junglelyd' is mainly made up of instrumentals in which Lasse Enøe's flute work stands out ('Danza De La Lluvia', closing track 'Salvaje'), but here and there a voice can be heard none the less. The band invited singer Luna Ersahin for the mystical 'Lucerito De La Mañana', and in 'Secreto De La Noche', Denmark based Mexican singer-songwriter Julian Maraboto Croda can be heard. Finally, the beautiful cover illustration is a design by German design studio Spiegelsaal, founded by Torsten Jahnke and Jochen Mönig. Highly recommended listening!