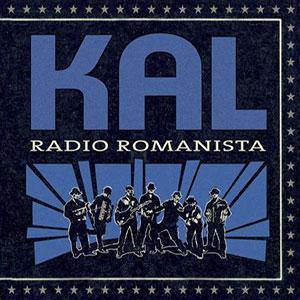 Kal ("black" in Romani, also see the cover of the album) is a project of Serbian Romani musician and activist Dragan Ristic. With his music Ristic wants to avoid at all costs ending up in folkloric clichés. He states: "If you expect me to play music because that is the first thing you think when you hear the word "Gypsy", then I'll play music, but please don't be surprised when I also have something to say!" In a style that he himself describes as rock-and-Roma (also see Czech band Terne Čhave), Ristic transcends the geographical boundaries that too often limit this kind of music; the tracks on 'Radio Romanista' are heavily influenced by Eastern music, punk and even Jamaican ska and reggae. Solid Gypsy album with a hint of innovation.