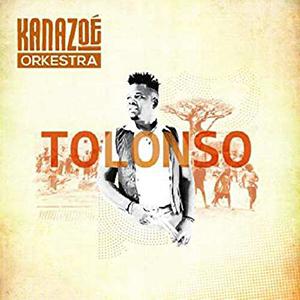 With 'Tolonso' (loosely translated: "where one celebrates"), Kanazoé Orkestra, the band around Burkinabe balafon master Seydou Diabaté, presents a successor to 'Miriya', their very much appreciated debut from 2016. 'Tolonso', a direct reference to Seydou's hometown in Burkina Faso (but with some good will also a nod to Toulouse, the French hometown of the band) may sound a bit less surprising than its predecessor, but alternating between Sembla, Mandingo and Bambara the band makes for another steaming West-African party. Sometimes sounding rather jazzy, like in opener 'Dounia', other times rousing ('Tama', a plea against fleeing the African continent without ever hoping or plannning to return, 'Nafiguiya', a warning against gossip or "fake news", or even 'Bembaliya', a complaint against the numerous internal disputes that plague many African nations) or even occasionally with a Latin flavor, like in 'Tounga'. For 'Djoroko' Diabaté was joined by Ivorian singer Dobet Gnahoré, and in the song the duo wonders when the shackles of the Africans will finally fall off. Another remarkable guest on 'Tolonso' is French keyboard player Jean-Philippe Rykiel, who we still remembered from his collaboration with Malian balafon player Lansiné Kouyaté. Be sure to check out the aforementioned 'Bembaliya' in which Rykiel's psychedelic keyboard work totally comes into its own, or 'Tounga', for which he goes Latin. In songs like 'Tama', 'Kounadia' and 'Nafiguiya' saxophonist Martin Etienne and bassist Elvin Bironien are also allowed to let off steam, but it is always Seydou's almost incredible dexterity on the balafon that demands the leading role. With 'Tolonso' Kanazoé Orkestra hits the bullseye for a second time!