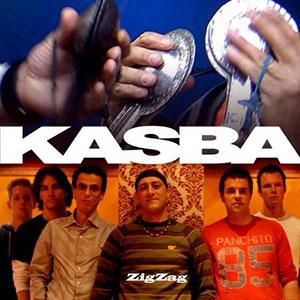 Notwithstanding Belgium has an important Islamic community, where raï music is concerned we tend to focus on France (Khaled, Rachid Taha, Faudel, Cheb Mami...). Time to introduce Dutch band Kasba whose career gathered momentum when they were invited to play at the Amsterdam Arena for the wedding of Prince Willem Alexander and Princess Maxima back in 2002. Their debut album 'Sidi Yahya' followed soon after that performance and now they are releasing its sequel 'ZigZag'. Kasba mixes raï with rock ('Yo Chichem'), reggae (the French and Dutch spoken 'Illegal') and Moroccan gnawa. 'ZigZag' is far from a bad album, but technically it sounds somewhat one-dimensional at times; opener 'Bambara' is also the strongest track on the album (check the remix of the same track by DJ Idriss).