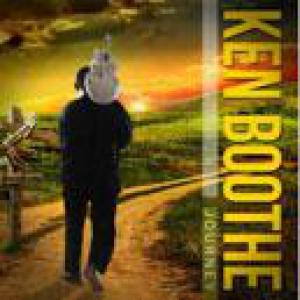 With 'Journey' Ken Boothe is putting his fifty years in the music business in the spotlight. Those who know Boothe from rocksteady classics like 'Artibella', 'Everything I Own' or 'Crying Over You', will probably not find what they are looking for on 'Journey' (although 'Can't Turn You Loose' is a rare nod to those "early days") as it concerns a contemporary new roots album. 'Journey' is completely self-produced and Ken recorded the album in his own studio in St. Andrew, backed by heavyweights like Robbie Lyn and Dwight Pinkney. Boothe is clearly trying to find a connection with the mainly dancehall and hip-hop loving Jamaican public, and although he largely succeeds ('Dancehall Girl', a song with Chauncy D and Josey Wales, with influences from Latin music and hip-hop elements, 'Love In Your Eyes', a duet with upcoming talent G-Mac) there are a few tracks on 'Journey' where he fails miserably ('Love Her', a commercial dancehall mishap). 'Journey' also contains some notable covers: 'Can't Turn You Loose' is a reggae version of Otis Redding's soul hit of the same name, but it's the lovers rock version of Spandau Ballet's 'True' (here called 'This Much Is True') that really jumps out. The songs on 'Journey' largely depend on Ken Boothe's amazing voice as production-wise the album has some rough edges.